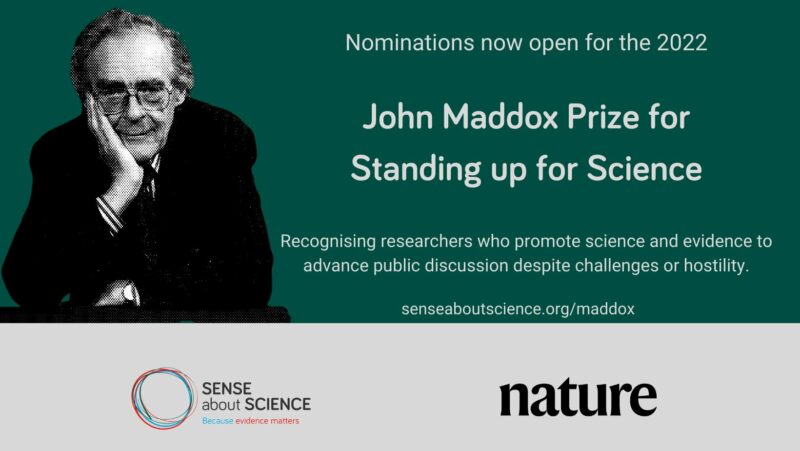 The John Maddox Prize recognises the work of individuals who promote science and evidence, advancing the public discussion around difficult topics despite challenges or hostility.

The John Maddox prize is a joint initiative of the charity Sense about Science and the leading international scientific journal Nature. The Prize has been awarded annually since 2012 to researchers who have shown great courage and integrity in standing up for science and scientific reasoning against fierce opposition and hostility. Each year there is one or two winners, and an additional prize for an early career researcher.

The prize brings into the spotlight the difficulty faced by many who fight to share the results of research evidence, and inspires and encourages people the world over to do the same. The 2021 John Maddox Prize received 136 nominations from 33 different countries.

Sir John Maddox, whose name this prize commemorates, was a passionate and tireless champion and defender of science, engaging with difficult debates and inspiring others to do the same. As a writer and editor, he changed attitudes and perceptions, and strove for better understanding and appreciation of science throughout his long working life.

“Denouncing fearlessly what he believed to be wrong, dishonest or shoddy, he changed attitudes and perceptions, and strove throughout his long working life for a better public understanding and appreciation of science.” – Walter Gratzer

Please contact [email protected]
Disclaimer: Youth Opportunities spreads opportunities for your convenience and ease based on available information, and thus, does not take any responsibility of unintended alternative or inaccurate information. As this is not the official page, we recommend you to visit the official website of opportunity provider for complete information. For organizations, this opportunity is shared with sole purpose of promoting “Access to Information” for all and should not be associated with any other purposes.
Tags: Award, Competition, Prize