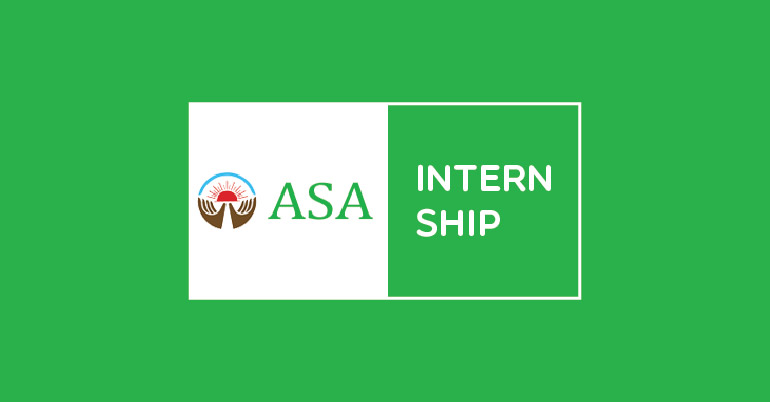 ASA offers high quality of Internship opportunities to the undergrad and graduate university students of universities who are interested from in-country and abroad. Being one of the early practitioners of microfinance in the world, ASA has gone through a series of evolution in it’s lifetime. This has become an alluring interest for m any foreign and in-country students.

ASA has taken up micro finance program in 1991 with a view to give an effort in the field of poverty reduction in Bangladesh. Since then ASA continued to carry on the micro finance program from small scale program to reaching in a large scale micro finance industry. It has become the major task of ASA today with admiration by many global leaders and nations for its effectiveness in impact creation to the million poor peoples’ lives in-country and abroad. Today the replication of ASA micro finance model has attained an increasing chase both at the national and international levels. By now twenty thousand ASA employees working in the areas of all administrative units of Government administration of the People’s Republic of Bangladesh has succeeded to prove them-selves to be highly dedicated, disciplined and self-motivated towards their daily routine works as to assist the poor.ASA has proven its efficiency in managing money through banking activities with the poor. Such lending efficacies of its program have resulted in creating such an innovative, specialized, standardized and a cost-effective ASA Microfinance Sustainable Development Model. And thus the successes of ASA microfinance model have gained the global acclaim today.
Until today a series of ASA’s microfinance upheavals, while banking with the poor, have become an alluring package for many foreign and in-country visitors. As to learn and exploring the growth and progress of ASA’s present microfinance service delivery methodologies and procedures the interest of the individuals ,practitioners ,MFIs and donors from around the globe are repeatedly mentioned in workshops, seminars and symposiums held about microfinance anywhere and in any country. Listening to such an attitude towards ASA microfinance by others causes us to receive evoke and inspiration to undergo all kind of turmoil and challenges in developing new products and marketing them for the people who wants and need those products. ASA microfinance program has thus achieved the quality of one of the brand lending methodologies for the poor in simultaneous to the formal banking sector that which are operating and newly venturing into various parts of Bangladesh.

Working Places of an Intern in ASA includes,

The office of Exposure and Internship Unit welcomes the students to visit and learn how ASA and its microfinance sustainable development model is operating in Bangladesh.

A prescribed Internship Application Form ( Official link ) to be filled in and sent after signing the scanned copy of the same to ASA Exposure & Internship Unit by the intern;

Telephone: 9116375, 8119828, 8110934-5, 8151113
Disclaimer: Youth Opportunities spreads opportunities for your convenience and ease based on available information, and thus, does not take any responsibility of unintended alternative or inaccurate information. As this is not the official page, we recommend you to visit the official website of opportunity provider for complete information. For organizations, this opportunity is shared with sole purpose of promoting “Access to Information” for all and should not be associated with any other purposes.
ShareTweetSubscribe
Share this

Get week's most popular opportunities!